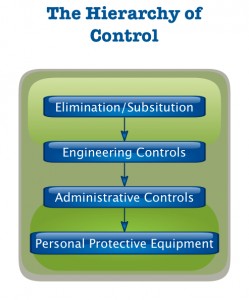 The first face-to-face meeting of the United States Technical Advisory Group (US TAG) will be taking place in Washington DC late next week, January 15-16, 2014.  The purpose of this meeting is to review the recently released first working draft (WD1) of the ISO 45001 Occupational Health and Safety Standard and attempt to find consensus among the members of the US TAG regarding the US position on important technical issues.  One of the important issues to be discussed is what  the ISO 45001 standard should include as requirements and what information should be presented in the Annex A as guidance.

When determining prevention and control measures, or considering changes to existing controls, consideration shall be given to reducing the risks according to the following hierarchy:

a) eliminate the hazard;

b) substitution with less hazardous materials, processes, operations or equipment;

These six steps are almost identical to those listed in the American National Standards Institute, ANSI Z10, clause 5.1.2.  The Occupational Health and Safety Assessment Series standard, OHSAS 18001, clause 4.3.1, has similar requirements, but only lists 5 steps; and  the USA OSHA’s required hierarchy of control lists only 4 steps.

With a quick search of the internet, many other examples of hierarchy of control sequences and steps can be found.  Some national regulatory agencies around the world have other required processes for determining appropriate controls.  Given this apparent lack of national and international consensus for the optimal number and sequence of control steps, is it appropriate for the new ISO 45001 OH&S standard to prescribe either a requirement to use a hierarchy of control process or to specify the number and sequence of the steps in the required process?

Based on our experience on the US TAG working on revision to ISO 14001, we believe that, when making additions to the ISO Annex SL High Level Structure (HLS) required text (see related post), adding less in the requirements sections helps to maintain the integrity of the HLS.  ECSI believes that the elegant simplicity of the HLS is diminished when significant amounts of discipline-specific text (OH&S in the case of ISO 45001) are added to the standard itself.  We believe that most of the additional discipline-specific text in the WD1, especially in clauses 6, 7 and 8, should be moved to the Annex A and treated as guidance.  By doing so, the ISO 45001 Project Committee (PC) will be able to avoid protracted discussions and negotiations over the content of the requirement section of the standard, which in turn will help the PC meet the tight deadlines (3 years) for publication of the standard.