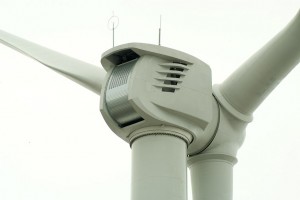 This turbine is at the top of a 300 foot tower. The garage door at the back is about 15 feet tall. There are electric motors in the hub that control the pitch of the propeller blades for optimal performance. Click to enlarge

About 60 percent of what we do at ECSI is internal and third party audits.  Every so often we do one that is very special.  Last year it was for the US Department of Energy at Argonne National Labs.     Recently, we performed a combined ISO 14001 and OHSAS 18001 Stage 1 and Stage 2 registration audit on behalf of one of our registrar clients for a fascinating company located in east central Iowa that assembles, tests and installs wind turbines.

Wind power is a growing business as you can see by driving around the countryside these days. When I first began planning for the audits I knew that the facility was only making the power generating part of the complete wind system.  So I was thinking … how complex can this be?  They probably purchase the generators and then bolt on a few pieces of hardware to attach it to the tower and blades.   Holy mackerel was I in for a shock.

As I was walking through the facility on the way to the Stage 1 opening meeting,  I was stunned at how huge and complex these turbines are.  The turbines are assembled in three sections (gear box, hub, and base) that will be put together on top of the tower in the field.  The castings that make up the housings for the gear box, hub, and base, are gigantic, each weighing close to 30 tons.  Once assembled, the gear box alone weights almost 50 tons and they were moving these around with cranes and gantry cranes.  Obviously the operational controls for ensuring safe lifting were an important part of the OHSAS portion of the audit. 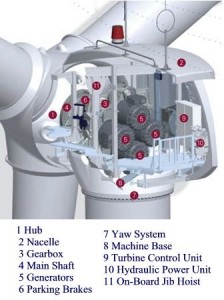 The gear box, base, and hub castings come from Germany and need to be cleaned and painted with the associated significant environmental aspects.  Large gears that transfer the wind energy from the blades to the generators need to be micro finished in an oversized vibratory deburring process.  This increases the life of the gears to around 20 years.  Replacing the gears if they fail is an expensive proposition because it needs to be done at the top of a 300 feet tower.

The assembled generators are also tested to confirm they are capable of generating the promised 2640 KW and 1320 VDC.  Generating that kind of energy in a testing environment requires special controls, training, and competence to be done safely.

The audit process was enhanced by management’s commitment to the system.  They recognized the value of the audit process in ensuring a return on their EHSMS investment.  Employees  also helped us collect the evidence we needed to support our recommendation for registration.  We are proud to have been a part of this developing technology and industry that is helping to reduce international environmental impacts of electrical energy generation.