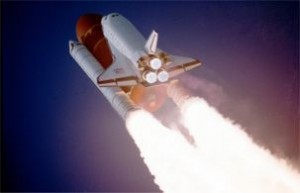 Recently we delivered an internal auditor training course at the Kennedy Space Center (KSC) near Orlando, Florida. The two day ISO 14001 Internal Auditor course was delivered to a group of 17 NASA employees and KSC contractors. The classroom was within walking distance of the enormous Vehicle Assembly Building, the tallest one story building in the world.

We had a few hours before and after the course and the NASA folks gave us a wonderful behind the screens tour of the Orbiter Service Building where we were able to walk around directly beneath the Orbiter Atlantis (OV-104) as it was being serviced after its recent mission (STS-135). We also visited the Vehicle Assembly Building where the Orbiter Endeavor (OV-105) was being prepared for transport to the California Science Center. Apparently Atlantis is to remain at the KSC in “partial readiness” to fly again, which was the buzz around KSC during our visit. We also got a tour of the recently constructed LEED Platinum Certified NASA Propellants North building which has received several awards for its design. 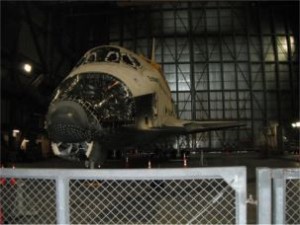 The training course we developed and delivered was specially designed to incorporate the elements of EO13423 and the KSC EMS documentation. The two day training helped refresh NASA internal auditor understanding of effective methods for performing value added process audits. The wide variety of processes and potential environmental impacts at KSC make internal auditing of the NASA operations and contractors especially challenging.

We are planning another trip to KSC to perform Phase II of the training. This phase will involve students participating in an actual internal audit at KSC. This 2 day process based EMS audit will demonstrate process audit techniques and coach NASA internal auditors in planning, implementing and reporting phases of effective internal audits

Here is a link to more information on our Internal Auditor Training courses.